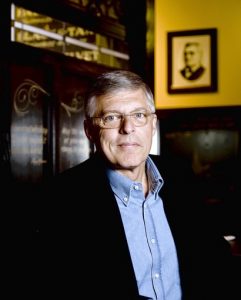 Dan Rosenthal, a longtime restaurateur (Trattoria No. 10, the Sopraffina Marketcaffes and Poag Mahone’s) who spearheaded the Green Chicago Restaurant Co-op in 2007, has turned to … garbage. About 160,000 tons of it.

“It’s going to be the largest food-scrap composting program in the nation,” he said. A Chicago Composts plant should be up and running by early 2012 once permits are in place, he added.

Rosenthal is on a mission to improve the Chicago restaurant scene with such projects. His green restaurant project, co-founded with Ina Pinkney and now with 300 members, aims to increase the number of certified spots that focus on environmental management and sustainable foods such as grass-fed beef, pasture-raised veal and vegetables from local producers, as well as educate customers on green issues.

Rosenthal also was chairman of November’s State of the Plate conference, a gathering of food industry professionals in Chicago focused on sustainable meat issues. Now, it’s on to garbage for the enthusiastic environmentalist.