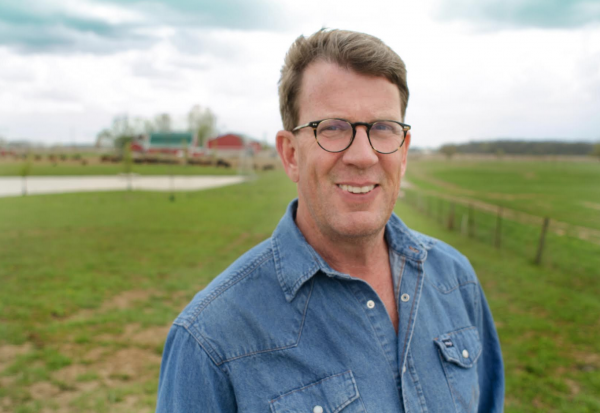 Like a lot of people, Chris Baggott‘s views on food and agriculture were upended by the writings of Michael Pollan and Joel Salatin. Unlike most people, Chris had already had at least two careers worth of success before he launched Tyner Pond Farm with his wife, Amy.

His first entrepreneurial venture was a small chain of dry cleaners, where he learned the value of email marketing. In the late 90s. After closing the dry cleaning business, Chris co-founded an email marketing platform called ExactTarget.

He left ExactTarget in the mid 2000s to co-found another company Compendium block where in 2010, Chris and his wife founded Tyner Pond, an AGA and USDA Organic certified farm about 20 miles east of Indianapolis, Indiana.

In 2013, ExactTarget and Compendium were both purchased by Salesforce and Oracle respectively. Those exit events were not an excuse for the Baggotts to slow down. In fact, they’re probably busier than ever.

Find a certified-grassfed farm or ranch near you.

Purchase “The Omnivore’s Dilemma” from an independent bookseller.

Purchase “In Meat We Trust” from an independent bookseller.

Do you really want to delete card?

This process cannot be undone.

Card has been deleted successfully.